So what’s the story about the aviation industry’s initiative to preserve the status quo at the Santa Monica Airport (SMO)? Yesterday, Daniel Larios reported in The Lookout that initiative proponents had informed the City Clerk that they would file their signatures yesterday. This was almost a week after the submission had originally been expected, but still nothing happened. While it is now likely that the AOPA will file its signatures today, is it possible that the AOPA won’t file enough signatures to put the measure on the November ballot?

The accepted wisdom in California politics is that if you can hire enough signature gatherers you can get anything on the ballot. Signature-gathering firms, like Arno Political Consultants, the firm hired by the AOPA to run the SMO campaign, typically operate on that basis – guaranteeing to their clients that if paid enough, by hook or crook they will get enough signatures in time. Even now I wouldn’t bet against Arno when it comes to the SMO initiative, but then again, it’s possible that they have already failed.

Why? Because of the calendar. Charter amendments (like the SMO initiative) can only appear on statewide elections – either general elections in November or primaries in June. The AOPA needs to get this initiative on November’s ballot or the next time it can be voted on will be in June 2016. That’s too late for them, because the leases to aviation businesses at the airport expire July 1, 2015, and by June 2016 the City Council will have had time to develop a plan for the airport that will dispel fears about overdevelopment.

Why so early? Because the City Council needs to put the initiative on the ballot at least 88 days before the election (this year that’s August 8), and can only do so at a regularly scheduled council meeting. The last regularly scheduled meeting before August 8 is July 22. The date the clerk needs to be able to put the matter on the agenda for the meeting is the Friday before that, July 18, but the clerk can only agendize it once the County Registrar of Voters has reviewed the signatures and informed the clerk that there are enough good, non-duplicative signatures from registered voters.

The City Clerk and the Registrar have under state law 30 business days to review the signatures. Last Tuesday, June 3, was 30 business days before July 18 – that’s why Larios in The Lookout reported that June 3 was the “deadline” to get the measure on the November ballot. (The City Clerk’s mid-May cut-off seems to be a conservative date to encourage petitioners to submit signatures early in case there are snafus with the validation process or other delays.)

Given that June 3 was the “safe harbor” for submitting, obviously as of yesterday Arno and the AOPA didn’t believe they had enough signatures to submit, because every day they delay increases the possibility that the Registrar of Voters won’t be able to validate the signatures before July 18. The AOPA is now counting on the Registrar to be able to process the signatures fast and not use up all the time the Registrar has by law.

What’s more, the delay in submitting the signatures shows that the AOPA has no hesitancy about lying to the media. Weeks ago the AOPA was telling reporters from The Lookout and the Daily Press that it already had 12,000 signatures. (They need about 9,200.)

How is that the AOPA finds itself in this predicament of counting on the Registrar’s office to process the signatures faster than they need to? The answer is the community’s response to the signature-gathering campaign.

Community Against Santa Monica Airport Traffic (CASMAT), Concerned Residents Against Airport Pollution (CRAAP), and Airport2Park (A2P), along with community organizations such as Friends of Sunset Park, mounted a tenacious campaign to counter Arno’s signature gatherers. This campaign involved sending volunteers all over Santa Monica, and even to grocery stores in neighboring Venice, to counter the signature gatherers, wherever they appeared, with leaflets exposing the deceptions contained in the AOPA’s initiative. Nearly all community groups in Santa Monica advised their members not to sign the initiative. (I was proud to be a part of the campaign.) 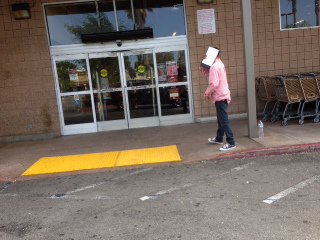 A signature gatherer outside the Von’s on Lincoln Boulevard

No one on the pro-park, anti-initiative side is declaring victory. The AOPA may well have enough signatures, and the Registrar may validate them in time. But if the initiative is on the ballot in November, no one here is rolling over.

4 thoughts on “Battling the Airport Initiative”