If you read my blog yesterday, where I wrote about what a struggle the Aircraft Owners and Pilots Association (AOPA) and their consultants, Arno Political Consulting, had to obtain signatures for their preserve-the-airport initiative, and then read the news reports that they had turned in 15,704 signatures, when they need about 9,150, you’re probably thinking that I was blowing smoke.

I wasn’t. The 15,704 number is a gross figure, including all the signatures that are not from registered Santa Monica voters, that are duplicates, or that are otherwise defective. These will be rejected when the Registrar of Voters reviews the petitions. Typically when a company (like Arno) uses paid-by-the-signature signature gatherers the rejection rate is high.

How high? One of the CASMAT volunteers who was counter-leafleting against signature gatherers over the weekend had, in a lull in the action, a civil conversation with an Arno representative who told him that Arno’s average rejection rate is 36 percent, and that in addition to that, with this petition they were finding a high rate, 6 percent, of duplicate signatures.

Now this information is secondhand, and who knows if the volunteer was getting played, but the numbers check out when you’re trying to explain why the AOPA waited so long to submit their signatures. If the 15,704 meant something, clearly the AOPA would have had enough signatures to submit them last week, to be sure they would be validated in time for the City Council to put the measure on the ballot.

Look at the numbers. Let’s say the volunteer got good information and the total of rejections and duplicates is 42 percent. In that case, the 15,704 “gross” signatures would equal 9,108 good ones. The AOPA says it needs about 9,100 good signatures – a coincidence? (And this 9,100 figure may be low; according the Santa Monica Daily Press, in the final tally of the Hines referendum Residocracy needed 6,525 signatures, representing 10 percent of registered voters. The AOPA needs, for its charter amendment, more — 15 percent; if 6,525 does equal 10 percent, then the AOPA needs 9,788.

What makes this even more interesting is that according to the City Clerk’s office, 102 voters filed notices rescinding their signatures – clearly enough to make a difference if it’s as close as it easily could be.

Delivering 15,704 signatures was no triumph for the AOPA. They may not even make it to the ballot.

There were many ironies surrounding the delivery of the signatures – the whole thing was a masquerade where a big national lobbyist firm was trying to pass itself off as a grassroots movement – but one irony stood out.

According to The Lookout, one resident the AOPA put forward to represent their astro-turf movement, Flora Yin, stated that, “‘Voters like me are tired of the insider political game that has gone on too long.’” Yin didn’t mention that she is a partner in the law firm that the AOPA hired to draft the initiative and run the legal side of the campaign. The firm, Reed & Davidson, and Yin herself, specialize in political law, including ballot initiatives – in other words, in playing the insider political game that so fatigues Yin. (FYI, the firm’s URL is www.politicallaw.com.)

Dear Ms. Yin: I know you’re tired, but voters like me are tired of operatives like you foisting phony populist initiatives on the rest of us. 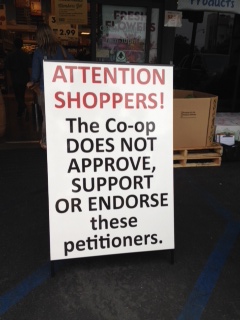