Labor Day is the traditional start of the election campaign. While this is a quaint notion given that Donald Trump began running for reelection immediately upon being inaugurated, and Joe Biden has been running to replace him for going on two years, I’ll use it as a starting point for returning to my blog.

Labor Day is also a reminder that many of our current crises, and I’ll include our response to Covid-19, have roots in the Republican Party’s attack, going back 70 years to Taft-Hartley, on the rights of American workers to organize. If workers and the middle class of workers that unions created were receiving the share of the American economic pie that they received half a century ago, when unions set the agenda for wages and benefits, imagine how much less discontented Americans would be? Imagine how much less they’d be fighting among themselves for the scraps that fall from Wall Street’s table?

I have written primarily about politics from a local perspective for 20 years, starting with the 2000 election. This is one year, however, when I have to admit that Tip O’Neil’s declaration that “all politics is local” seems irrelevant. The issues at stake in the national election, not only for President but also for Congress, overwhelm local concerns. Nonetheless, I would still hold that the attitudes of voters take shape locally, given that anti- and pro- Trump votes can be arrayed over a geographic spectrum from the centers of cities to rural communities, whereby the farther you live from an urban center the more likely you are to support Trump.

The closer people live to each other, the more they must acknowledge the role of government. People who live in rural areas and in small towns, even though their lives and livelihoods are just as or even more dependent on government than those of people who live in cities, are not reminded everyday of that dependence. They believe passionately that they are independent, “free” of the need for government. Yet they get back more money from Washington than they send there, and these days Republican members of Congress from rural districts are scrambling to save the Post Office.

The cities have also been, since the end of the 19th century, where most immigrants have arrived and settled, and where Blacks from the South settled during the “Great Migration.” The nativist sentiments that Trump exploits are going to be stronger where there are more “natives” (paradoxically where there are fewer immigrants to bother them) even if those natives are often themselves descendants of the despised immigrants of a century ago. While there’s no doubt that changing demographics have caused tensions in cities over the years, ultimately city dwellers realize that they “have to get along,” to paraphrase the immortal words of Rodney King, and Trump’s appeals to xenophobia have been less successful among whites who live in cities and suburbs, and they have little appeal to the immigrants themselves, let alone to African-Americans.

So, I don’t know if all politics is local, but a lot of it is.

We saw that in the closing days of the recently-concluded session of the California legislature, where a host of housing bills died. I’m not endorsing every provision of every housing bill that failed, but in the face of a statewide housing crisis, a crisis that Governor Newsom promised to solve, it’s incredible that the legislature has let another year pass without taking significant action to make it easier to plan, finance, and build housing.

The obstacles to housing legislation are essentially local, but not necessarily in ways that are obvious.

The obvious local obstacle to housing legislation is that statewide laws limit the cherished powers of local governments over land use. Local governments, which have responded over the decades to constituents who oppose building apartments by zoning apartments out, claim, loudly but unconvincingly, that Sacramento does not need to limit their powers over land use to get more housing built. Nonetheless, I don’t believe that local government opposition has been the crucial factor preventing state legislation. By now a majority of legislators, and the governor, are ready to buck the interests of local governments and pass major housing legislation. The question is why they haven’t done so. 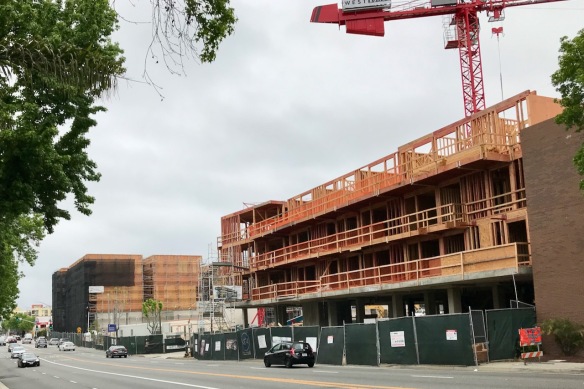 I would argue that the reason for the deadlock is that the elements of the Democratic coalition in Sacramento cannot agree on legislation that balances the interests of those elements. There is agreement if not consensus that the solution to the housing crisis, which has resulted in high housing costs for California’s middle and working classes and the shame of rampant homelessness, is to build more multi-unit buildings, in all forms from duplexes to apartment towers (as and where appropriate), as urban in-fill rather than more sprawl. There’s also broad agreement that the state needs housing for all income levels, notwithstanding that some “housers” from the “YIMBY” side push relaxed zoning requirements as a cure-all solution, and some housers from the anti-gentrification side push only for more affordable housing.

What happens in Sacramento, though, is that elements of the Democratic coalition resist housing legislation that affects the concerns of their constituents. These concerns aren’t ideological or national, even though they reflect issues that are general; they are what local politics is all about.

For instance, the building trades unions want to make sure that the housing that is enabled by statewide legislation does not undercut the wage rates of their members or their jobs. They argue that the good wages they have negotiated are what allow workers to afford housing, and they have a point. Given the real cost of building housing (independent of wage rates), a good case can be made that it’s not that housing costs are too high, but that wages are too low. (A result of the Republican assault on labor unions; see above.)

This legitimate advocacy for their members, however, frustrates proponents of affordable housing, including unions that represent relatively low-wage service workers as well as builders of housing for the homeless, who are astounded by the high cost of building affordable housing.

Then there are complex issues about where to build housing so as not to displace currently housed working people. Legislators from working class areas want more housing options for their constituents, but they don’t want to see development pressures that ratchet up the cost of existing housing by suddenly increasing the value of land. While on an economic theory level well-intentioned people may agree that too much land in California cities is zoned for single-family houses, it’s more difficult on a practical level to agree on exactly where and how single-family zoning should be modified.

I could go on; I haven’t even mentioned conflicts over financing. The point I want to make is that these conflicts are too complex to resolve in the pressure of a legislative session, especially in the context of all the other crises we are experiencing today. What needs to happen is someone—perhaps the governor, or if not him, a consortium of housers—needs to canvass or convene all the elements of the Democratic coalition and forge an approach to housing legislation that balances their competing interests.