I’ll admit it — I love it that Santa Monicans are arguing about what should go on in Palisades (and our other) parks. When it comes to city life and politics, what’s better than arguing about how to use public space? (So long as you’re not in Istanbul rioting over it.)

I mean, what a relief from the development wars — it’s so refreshing to hear our city council members being accused of selling out to exercise trainers instead of developers.

I say so because we shouldn’t take public space for granted. Not today in America. Consider so much of America built since World War II, where the most public of all spaces are malls. We live in a city where there are vibrant public spaces – not only parks like Palisades Park, but also the Promenade and the Pier.

And streets where people actually walk! What if the closest thing you had to a main street was a highway lined with fast food drive-thru’s and strip malls?

We live in a city. Cities (and real towns) have public spaces.

Public space is not the same thing as open space, or natural space. Yosemite is the greatest of parks, but it’s not a public place — it’s not where people go to be with the public. Instead, it’s a place where people go to have an enhanced private experience (even if, or particularly if, the roads are clogged with others looking for the same).

It’s the genius of park designers who are geniuses that they can create in city parks, in public places, the sense that you can be alone with nature in a place where you do not expect to be alone.

This is why, as I wrote last week, I have high hopes for Tongva Park and, naturally, I have the highest of hopes that we can create a great park on the site of the Santa Monica Airport. (Speaking of which, I’ll be out of town this weekend, but I hope you join Airport2Park.org for a potluck picnic Sunday at Clover Park (noon to 2:00 pm) where noted urban planner James Rojas will run a fun workshop to envision an airport park.)

What about the current controversy over trainers in our parks? 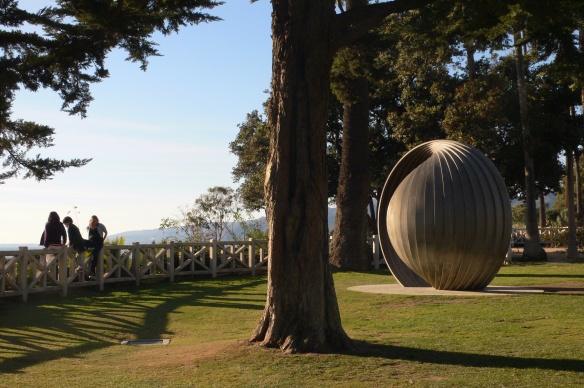 With everyone all riled up I hate to be boring, but I have to give the City Council credit for adopting a good program to regulate exercise trainers in the parks, at least on a “pilot” basis that will be evaluated in a year.

To begin with, I reject both extreme positions: On one hand, it was becoming intolerable (or had already become intolerable) to allow private trainers and exercise classes to dominate park use, particularly in narrow Palisades Park, for all the reasons you’ve heard (crowding out others, improper use of equipment, impacts on turf, etc.). On the other hand, a blanket prohibition of trainers and trainees wouldn’t be right either – i.e., it’s not surprising that after the vote to limit trainers, Santa Monica got ridiculed for “banning healthy people from parks.” Parks and exercise are a what you might call a good fit.

City parks are for people to use. It’s ironic, but in the past neighbors’ complaints about Palisades Park have focused on the homeless “taking over.” Homeless people are attracted to parks when other people don’t use them. Trainers bringing classes to a park is a sign of a park’s success.

But too much of a good thing is not a good thing. In this situation, you need to balance uses through regulation, and the council did a good job. (This is one of those cases where you think they must have done right since everyone – neighbors and trainers — seem to be mad at them.) They regulated how many trainers can use the park and where they can hold their workouts; the pricing seems fair and favors the use of other parks; the council banned trainers from Palisades Park on Sundays; and they regulated the use of equipment.

Let’s give this plan a try and see how it works out.

6 thoughts on “Arguing about the good stuff”