I’m still consumed with (and writing about) the idea of turning the Santa Monica Airport into a big park, and this post contains more follow up to the Oct. 3 Airport2Park workshop — first to let readers know that videos of the workshop (in two parts) are available to watch on the Airport2Park website.

Honestly, the raw footage hasn’t been edited yet (and in certain places sound needs to be added from other cameras that were recording the meeting) and you may not want to spend two hours watching the whole event (although I guarantee you will be entertained!), but in the you-owe-it-to-yourself department, be sure to watch Mark Rios’ presentation on how airports and industrial sites all around the world are being turned into parks (which begins at the 20:42 mark of Part 1), and the presentation of the ideas from the breakout sessions (which begins around 11:30 in Part 2).

You will be edified.

In the meantime, we at A2P are tabulating the responses we received not only in the breakout sessions, but also from the many individual surveys that we have received from the public. (It’s also easy to add your ideas for a park to the mix by sending a message to Airport2Park from the website.)

Over the past decade or so, a number of landscape architects have made the case for a movement they call “landscape urbanism” which seeks to understand how cities develop by looking more at terrain and ecosystems than at a city’s buildings. It’s not coincidence that this way of looking at the city has arisen in an era when many cities are dealing with the remains of the industrial revolution in a postindustrial economy. (Perhaps the most famous example of landscape urbanism is the redevelopment of the High Line In New York City.)

Intrinsic to the landscape urbanism movement is the notion that in the urban context landscape is not simply landscape, it is what shapes the city. More specifically, a park is not simply a park. Parks and other open spaces not only serve important functions on their own, but also affect the performance of other urban functions.

There are many debates floating around about the role of landscape and the impact of landscape urbanism on the design of cities, but one thing that was clear from the A2P workshop is that ordinary residents instinctively understand the principles involved. While there were many calls for the restoration of terrain, unprogrammed spaces, and “quiet places,” there were as many calls, typically if not always from the same people, for connections to be made with the surrounding city, for active recreation, arts, and cultural uses, and for restaurants and cafés. People get it.

When asked at the end of the workshop to list five “takeaways” from the meeting, Mark Rios mentioned these — quiet spaces, connections to the city, environmental fixes (swales and the like), the arts, and cafés. But he also raised and responded to an important question that people might have: would trying to accommodate all these different uses lead to a compromise design, a “weird camel,” as Rios put it?

No, he said, a great park can accommodate many uses, programmed and unprogrammed alike, without being a compromise. Think about the great parks you have experienced in your life; a great park design is not compromised because the park accommodates conflicting purposes – doing that is what makes it a great design.

This is an important concept for any kind of urbanism, not only of the landscape variety. We spend a lot of energy trying to prevent things from getting worse. But it is possible to make things better. 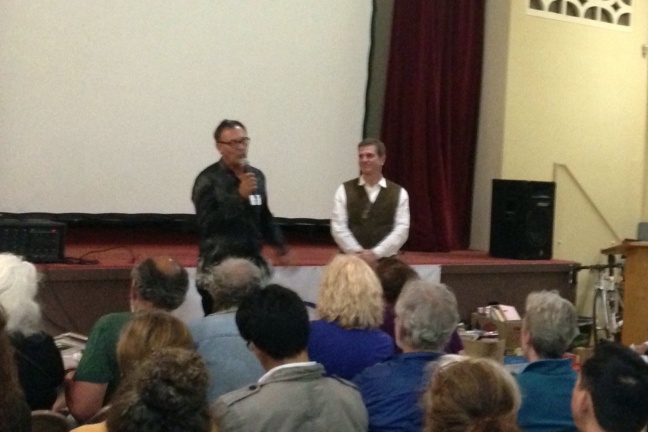 1 thought on “In this case, no need to compromise”